Yes, it’s true that I am a country music freak (from California,) but it’s only been recently, when country became more rockified. I love the sound of the new young artists who are blending their roots in the country western world with some of the cool rock bands they also grew up with! (ex. Eric Church’s “Springsteen.”) Since I was a teenager frequenting Winterland, and listening to the best rock stations in San Francisco, I liked the crossovers of the day – the Allman Brothers, Lynyrd Skynyrd, The Outlaws, Charlie Daniels Band, Marshall Tucker, etc. Besides the catchy rhythms (Ramblin Man), lyrics (Simple Man) and rockin’ fiddle (Devil Went Down to Georgia,) this music ROCKED! And, tonight at Bottle Rock was a prime example of when country meets rock, when rock meets country, with the headliner-The ZAC BROWN BAND! (www.zacbrownband.com) Whereas, these guys are planted very firmly in country western and folk music, they know how to rip, rock, and roll. And, this came across straight away by the looks of their stage set – a smoky, smoldering, underground blue-collar, machine shop vibe with the keyboard and drum risers lined with gears, ratchets, various wheels, and stuff I couldn’t possibly name, not being an expert in that field. 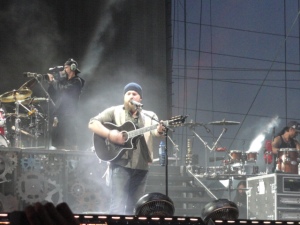 Hailing from the great state of Georgia, Zac Brown was the eleventh out of twelve children, which might be why he surrounds himself with a large band of eight guys. The talent in this band is pretty incredible, with musicians schooled in a variety of unusual instruments, such as mandolin, organ, banjo, ukulele, pedal steel, keyboard, and violin, in addition to guitar, bass, drums and percussion. This, of course, raises their music level above and beyond your typical country western band sound. And, the highlight of tonight’s show, and every show this band performs (in my opinion) is their absolutely rockin’ fiddler, Jimmy De Martini. This man is mesmerizing and thoroughly captivating when he takes center stage and all eyes (and ears) are on him! He can rock a fiddle like Jimi Hendrix rocked a guitar – aggressive, fierce and fiery! There is nothing sweet and subtle about it – this man makes fiddle playing sexy…and the Zac Brown Band is better because of him! Every band has guitar, bass and drums in their repertoire, but to include a violin and highlight him, was a genius idea that puts this band in a league of their own. Check out the comparison between Jimmy and Charlie Daniels here: http://wyrk.com/who-is-the-best-fiddler-in-country-music-poll/

Starting off their set this warm Napa night with ‘Keep Me in Mind,’ the ZBB played fan favorites, such as, ‘Whiskey’s Gone,’ ‘The Wind,’ and ‘Chicken Fried,’ as well as covers of Dave Matthews Band’s ‘Ant’s Marching,’ Led Zeppelin’s ‘Kashmir,’ Charlie Daniels’ ‘The Devil Went Down to Georgia,’ and Metallica’s ‘Enter Sandman.’ The morphing of country with rock just drives the point home that country absolutely rocks!

Then, about halfway through the show, Zac invited Kacey Musgraves onstage to join the guys in playing her song, ‘Follow Your Arrow,’ and in between some of the songs, Zac subtly blended well-known folksy songs with his music. The intro to his song, ‘The Wind’ was Bob Dylan’s ‘Blowin’ in the Wind,’ which was a clever blend, and ‘Free’ led into Into ‘The Mystic’ by Van Morrison. This show kept the crowd on their toes, combining songs from different genres, eras, and artists. What an interesting variety of music, and done with the Zac Brown Band’s signature sound autographed across it. This show made it clear that music transcends the lines between style, genre, and types of music, and that one band can crossover from one style to another, and make them both sound excellent. Their setlist may look schizophrenic at a glance, but you had to be there to believe how creatively genius it actually was. The next time these guys come to your town, I highly recommend you check them out. In the meantime, check out their songs online (Youtube, iTunes, etc.)

This entry was posted on January 20, 2015 by nadinerocks. It was filed under Local (NorCal) Vibes and was tagged with Kacey Musgraves; Country Western music; Rock and Roll; Jimmy DeMartini, Zac Brown Band; Bottle Rock Napa.