If and when you ever visit Nashville, Tennessee, you must check out Broadway (especially “Lower Broad,” which is what the locals call the hapnin’ part of this street) and hit the honky tonks! Talk about a music lovers haven! Be warned, though, that it is also a tourist haven. No matter, it’s a must see, as it is all about live bands, entertainment and a place to see and be seen. Oh, and I mustn’t forget the hoards of neon signs! It’s a cross between big city “Broadways” and “Bourbon Street” in New Orleans, bordering on cool and nostalgic, and just plain tacky! It’s your call, but I personally love the look of neon, because it melds the historical past with the high-tech present.
If you’ve done your homework, or paid attention, you’ll have heard of one of the biggies, “Tootsie’s World Famous Orchid Lounge” in Nashville. Tacky and purple painted as it is, it’s just an old honky tonk that has been the spot where loads of country musicians have come to play. The walls are covered with framed pictures of every country star (and more) that you could dream of! It’s a rustic, old dive, but it’s got history, personality, and plain old fame! 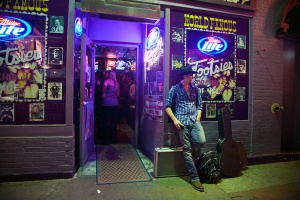 Another very fun place – and my personal favorite – is just a few doors down, called “Robert’s Western World.” Resembling an old western apparel store, because it actually once was one, Robert’s is home to my favorite local band (so far,) called the Don Kelley Band. This foursome consists of lead man, Don Kelley (guitar & vocals,) Slick Joe Fick (upright bass & vocals,) Artie Alinikoff (drums & vocals,) and the most amazing, young (and I mean, young!) guitar player I’ve ever witnessed, Daniel Donato! He just turned 20 (April 6, 2015,) doesn’t look like a razor has ever touched his smooth face, and this kid SHREDS on his guitar like I’ve never seen! And, I’ve seen a whole lotta guitar players in my day!! Check out his website: www.danieldonato.com, or on Youtube tearing it up here: https://www.youtube.com/watch?v=Ko0Uze4Vd3g. This kid’s fingers are faster than lightening!!
Whereas, Daniel’s talented guitar playing takes center stage much of the time, Joe Fick brings the personality! His animated facial expressions, while he rocks his upright bass, is a show in itself. He is a humorous character who makes faces at his instrument, spins it, seems to have conversations with it, and even jumps and stands on the bloody thing! He loves what he does and obviously has a blast doing it! This guy is a kick, I tell ya! More on Joe here: http://www.slickjoefick.com 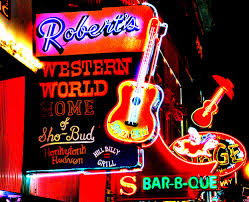 Meanwhile, the other two, Don and Artie, hold down the fort, while Don is clearly the headmaster, and Artie, the heartbeat. Altogether, they compliment each other as a cast of very different characters, and an upbeat, fun-loving, crazy good band! A must-see when you come to Nashville!! Don’t miss them!! 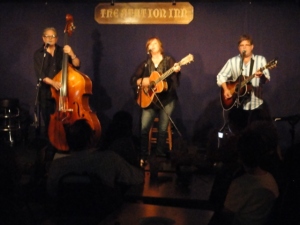 Broadway Street (aka. “Broad”) is the main drag through Nashville’s downtown area. It reminds me of a mini-Bourbon Street, loaded with people, places, and music (oh, and tons of neon signs!) though a lot less tacky. Our first pit-stop was to Station Inn (http://www.stationinn.com/). Here, in this underground basement, was the history of where Bluegrass and Roots Music pickers played “unplugged” way before it was popular. This night we specifically went to see Suzy Bogguss. (http://suzybogguss.com/about.asp) a platinum selling songstress who has a full bookshelf of Grammy and CMA awards. Suzy and her band were smooth and easy to listen to. Her voice is melodious and pleasant, making it very easy to get lost in the songs. She is also a nice little storyteller, filling the audience in on factual tidbits, as well giving us a chuckle or two with her humor. She definitely knows how to entertain an audience in more ways than one.

Next, it was off to see the Don Kelly Band at Robert’s Western World (http://robertswesternworld.com/) on lower Broadway. Unfortunately, by the time we got there, it was towards the end of the DKB set, so we only caught about 4-5 songs. But, I must say, they were impressively rockin! Apparently, they play here four nights a week, and though this was a Wed. night, the place was hopping! They played familiar (and well loved) classic Country Rock, but they didn’t just deliver them….they nailed them. It was impossible to sit still and/or refrain from dancing. These guys were just too good. Between the lead guitarist’s amazing talent, and the standup bassist who’s unique style was hard to take your eyes off, this band drilled their stuff straight to my bones and got me into what I call “my zone.” (Zone=eyes closed, feeling the music, moving to the groove, in another world, almost drugged.) A close guy friend (ie. my ex-husband) used to say it was like I had just shot up, mainlined music right into my arm. And, he’s kinda right. Music is my drug – it makes me forget my worries and troubles, it puts me in a happy place, and it’s what I call a cheap form of therapy. Tonight was just the start of this stop on my musical quest. 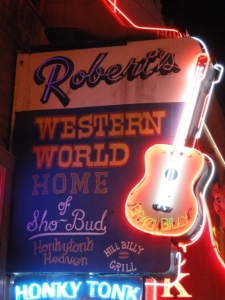 Tomorrow (June 7) begins the Country Music Festival (http://country.cmaworld.com/cma-music-festival), which is the reason I came to Nashville. (I also have friends living here who may be even crazier music fanatics that me!) And, being new to the Country scene, this will give me a good taste of what this type of music is all about…live and in person, that is. I’ve been listening a-plenty lately, and have become a new fan of a number of these southern artists. But, now is the time to see them perform and show us what they got!! 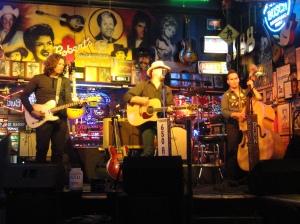